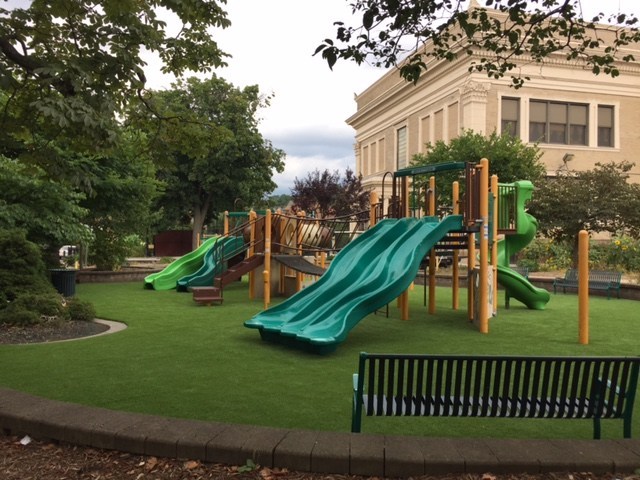 Bloomfield, an established community on the outskirts of Pittsburgh, PA came together to give their playground a well-deserved facelift. After three years of bake sales, car washes and other forms of fundraising, residents saved enough to give Friendship Play Park a new play surface.

“The park originally had poured-in place rubber surfacing which had expanded and cracked over the years due to the weather in Pennsylvania,” said Steve Cianflone, owner of Sunshine Surfacing, a local artificial grass sales and installation company. “Artificial grass is a great alternative because it looks great and stays in place no matter the weather, all 365 days a year.” The 4200 sq. ft. artificial grass conversion with was installed over the span of four days with three different teams. “We had a glue team, an install team and a cut and seaming team,” Cianflone said. “There were 130 inserts that needed to be cut around on the 10-yr-old play structure.”

Sunshine Surfacing has been selling and installing artificial grass for 10 years, with nearly 85 percent of their business being playgrounds. The company has worked with many other commercial clients such as the YMCA/YWCA, Salvation Army, schools and stadiums. They’ve also done some work for Make-a-Wish Foundation, providing special surfaces for children whose conditions would have otherwise prevented them from enjoying a regular playground. “Artificial grass is the perfect alternative for any landscape,” Cianflone said. “It’s really safe because playground turf is padded and there’s no mud, even right after a rainstorm.” He says there are so many positives when it comes to artificial grass installation. “Many kids have grass allergies, you don’t have to worry about that with synthetic grass.”

Cianflone said that he has encountered parents that have voiced safety concerns when it comes to artificial grass installation. “I explain that it isn’t the turf – it’s the infill, in particular the rubber infill that is made from used tires, which contain petroleum,” he said. “We have never used that type of infill – it’s just common sense.” He says there are many infill alternatives, including the silica sand they use. He also suggests that parents ask to see the lead free certifications before an artificial grass installation is provided by companies like Genesis Turf and to use an experienced installer. “We’ve done over three thousand installs in Pennsylvania alone,” he said. “Our jobs come from word of mouth and we are very proud of that.”

Can Artificial Grass Produce Enough Energy to Power Your Home? 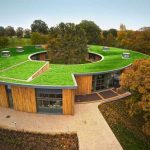 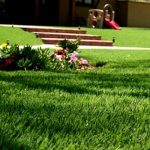 Artificial Grass Can Increase Your Homes Value
Scroll to top